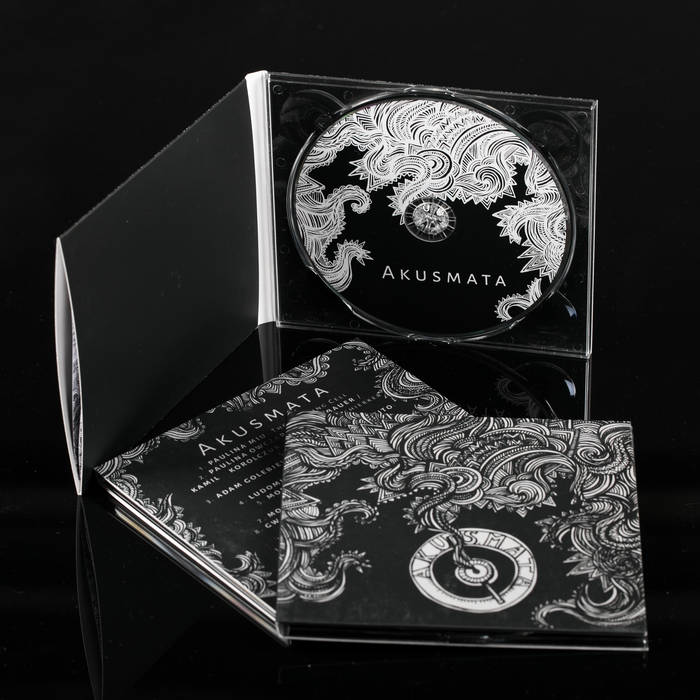 Greek ἀκούσματα translates as ,,heard’’ but also ,,collections’’. It is a collection of statements that were treated both as a source of specific knowledge and as a slogan explaining the complex reality. Pythagoras used them at the turn of the 6th and 5th centuries B.C. Supposingly his students had to remain silent for five years and could not see their master. It was thought the view of the speaker, distracted the listeners and did not let them concentrate fully on the transferred knowledge. Much later, in the twentieth century, the French composer Pierre Schaeffer reminded about acousmatic experiences - listening to sounds in isolation from their sources. On the basis of his experiments, musique concrète was born. This record is an attempt to face these traditions. Selected artists were asked to show their way to blurring the sources of sounds that in the process of experimenting, processing lose their meaningful luggage and become something that must be imagined anew. Akusmata.

1. PAULINA MIU: The Howling Cell
The Howling Cell. An animal, lightning, wind and silence live in me. I am a cell dance, a vibration that you can listen to. My voice causes small earthquakes to get to the other side, get under the skin. It is full of wolf fur and softens with jelly jelly. Doubles, triples, pupates, endlessly. My voice looks for its ancestors, tries to invite them, invoke them, arrange a meeting. How many millions of creatures lived in front of me and what sounds fell into their ears? Where were they and what my own ears heard before they took shape and came to the surface?
PAULINA MIU. A performer, voice situation designer, composer, singing instructor. She listens to the world, taking care of the phenomena occurring in her sound tissue. She improvises and experiments. She specializes in alternative vocal education. She collects traditional songs and practices and teaches white singing - archaic vocal technique from Central and Eastern Europe. For years associated with the ,,Węgajty Theater’’. She graduated in music therapy at the Academy of Music in Łódź and intermedia at the University of Arts in Poznań. It implements and supports various social and artistic projects. With her actions and voice she appeared, among others in ,,Traces’’ (Seoul, South Korea), ,,Vougascapes’’ (Vouzela, Portugal), ,,Between Sky & Sea’’ (Herdla Island, Norway), ,,Munetik Symposium’’ (Armenia), ,,Malta’’ Festival (Poznań), ,,Konteksty’’ (Sokołowsko), ,,Spoiwa Kultury’’ (Szczecin), ,,Duchamperie’’ (Bydgoszcz), ,,DNA Festival’’ (Gdańsk), ,,Musica Privata’’ (Łódź), ,,FRIV’’ (Poznań), as part of the ,,Visitors’’ project (Hungary, Montenegro, and Albania).
soundcloud.com/paulinamiu

2. PAULINA OWCZAREK / ERIC BAUER / KAMIL KOROLCZUK: Live at Schierker Strasse
Live at Schierker Strasse. Improvisation for saxophone, tapes and electronics, recorded at home in a very pleasant atmosphere.
PAULINA OWCZAREK. A saxophonist and improviser, plays in the ,,Krakow Improvisers Orchestra’’, ,,Sambar’’, ,,Instytut Intuicji’’. She lives and works in Krakow.
ERIC BAUER. He works with a modular synthesizer since 2014. Under the pseudonym ,,daszwitscherndervoegel’’ he recorded a series of minimalist compositions and structural improvisations released on a tape. For two years, he has focused mainly on free improvisation. Other forms are, however, not excluded. He currently lives in Berlin.
KAMIL KOROLCZUK. Uses tapes and various sound processing. Plays mainly improvised music, noise and sound collages. He is a co-creator of the series of concerts ,,Les tomates amplifiées’’, which takes place in Berlin and runs the publishing house ,,tmrw>’’.
soundcloud.com/paaulina
mostfraubauer.wordpress.com
soundcloud.com/kamil_korolczuk

3. ADAM GOLEBIEWSKI / MICHAEL ESPOSITO: Zero Is Safe
Zero Is Safe. Adam Golebiewski - drums, objects and Michael Esposito - electronics, EVP. The recording was made by Bartek Olszewski in August 2015 in Poznań.
ADAM GOLEBIEWSKI. An experimental drummer, musicologist, sociologist. He mainly moves on the basis of free improvised music, free jazz, noise, contemporary composition. In his work, he focuses on the extreme expansion of the drum kit's capabilities in terms of its sound and expression, which results in a direct and touching sound language. He is the author of sound installations, site-specific projects, and audio-performance. He performed and recorded with the world's leading representatives of experimental music.
MICHAEL ESPOSITO. Born in the United States, a researcher of paranormal phenomena (as part of ,,Phantom Airwaves’’), a theoretician and a musician. He implements projects related to EVP, field recordings and experimental music.
www.facebook.com/AdamGolebiewskiArtist/
adamgolebiewski.bandcamp.com
vimeo.com/adamgolebiewski
soundcloud.com/adamgolebiewski
www.discogs.com/artist/1214261-Michael-Esposito
en.wikipedia.org/wiki/Michael_Esposito_(paranormal_investigator)
blog.wfmu.org/freeform/2013/03/interview-with-michael-esposito.html

4. LUDOMIR FRANCZAK: Spalony las
Spalony las. From 2013, I am burying microphones about 60 cm underground, in a metal or wooden case. I leave them there for about an hour. After this time, I dig out and search the recordings. Often, I notice anomalies of sound waves. In these places I try to continue working on the recording using the methods developed by K. Raudive - slowing down the sound and passing through the dehumidifying filters. The attached composition contains the same fragment of the recording processed and reduced three times. The original field recording comes from microphones buried about 90 cm underground in a metal can in a burnt pine forest.
LUDOMIR FRANCZAK. Visual artist, theater director, curator. His works are shown in galleries, theaters, public spaces and festivals in Poland and in the world. He collaborates with musicians (Marcin Dymiter, Robert Curgenven), visual artists (Magdalena Franczak, Sebastian Buczek) and theaters (,,Schaubude’’ in Berlin, ,,Kana’’ in Szczecin, ,,Szwalnia’’ in Łódź). He is a scholarship holder of the Visegrad Foundation (VARP), Ministry of Culture and National Heritage (2014) and three-time Marshal of the Pomeranian Province. Nominated for the title of ,,Kulturysta roku 2013" by radio journalists from ,,Trójka’’. Winner of the ,,Placówka’’ program of the Theater Institute (2016), awarded by the Sobole Foundation in the ,,Design Alive Awards 2016’’. He deals with the problem of memory and identity. Using intermedia activities, he builds complex projects using both visual arts, as well as history and literature. He is the author of artistic publications.
lfranczak.blogspot.com

5. MODELBAU: Terminal Beach
Terminal Beach. Much of the source material includes recordings of water, sea, rivers, rainfall and small creeks; various transformations, both digitally and analogue have been applied. All recorded, april 2018.
MODELBAU. A solo project by Frans de Waard, in which he focuses on lo fi sound sources using: dictaphones, radios, walkie-talkies, walkmans, small synthesizers. The idea of the project is related to the recording only with minimal editing. Frans de Waard - active musician since 1984, realizing recordings in the following projects: ,,Kapotte Muziek’’, ,,Beequeen’’, ,,Goem’’, ,,Zebra’’, ,,Freiband’’, ,, Shifts’’ , ,,Modelbau’’. In 1984 he created the label ,,Korm Plastics’’. In the years 1992-2003 he worked in the pioneer publishing house ,,Staalplaat’’. He publishes an invaluable source of information about independent music - the ,,Vital Weekly’’ bulletin (over a thousand issues). He has performed in Europe, the United States, Russia and Japan. His associates include: Steven Wilson, Jaap Blonk, Andrew Liles, Radboud Mens, Keiji Haino, Pan Sonic, and others.
www.fransdewaard.com
kormdigitaal.bandcamp.com
www.kormplastics.nl

6. GINTAS K: In case
In case. A piece made especialy for AKUSMATA compilation.
Gintas K. Gintas Kraptavičius a Lithuanian sound artist, composer living and working in Lithuania. Gintas has been a part of Lithuanian experimental music scene since 1994. Nowadays he is working in the field of digital experimental and electroacoustic music. His compositions are based on granulated sounds, improv, new hard digital computer music, small melodies and memories. He has released numerous of records on labels such as ,,Cronica’’, ,,Con-v’’, ,,Copy for Your Records’’ , ,,Bôłt Records’’, ,,Creative Sources’’, ,,Sub Rosa’’ and others. His works was presented, performed at various international festivals, symposiums as ,,Transmediale.05’’, ,,Transmediale.07’’, ,,ISEA2015’’, ,,IRCAM forum 2017’’, ,,ICMC2018’’. Winner of the II International Sound-Art Contest ,,Broadcasting Art 2010’’ in Spain. Since 2011 member of Lithuanian Composers Union.
gintask.puslapiai.lt

9. BARTEK KUJAWSKI: Ja
Ja. Sometimes it is difficult to judge whether the sound is acoustic, electric or digital, and often a single hit of the instrument gives the impression of a syllable shouted by a human being. There are compositions in which it is actually a processed voice, but it may well have nothing to do with speech, and the mind receives it because it has been suggested to him. Is it not that only what is in the mind of the recipient, after the processing of all stimuli, matters? Is it then that I am able to dance shamelessly to such a piece, which must be added in my own head to recognize it as full club music?
BARTEK KUJAWSKI. He is a fairly well-known musician on the Polish experimental independent scene. In the past, he released a few albums under the pseudonym ,,8rolek’’, mainly in the ,,Mik.Musik’’ label, but also in several others, he played at festivals around the world (among others: ,,Club Trasmediale’’ - Germany, ,,Vien Modern'' - Austria, ,,Skiff’’ - Russia). For several years, he has been publishing under his own name and playing in the ,,TSVEY’’ duet with Piotr Połoz. In the years 2016-2018, he released three solo albums, some of them were listed among the best publications of the year by music magazines, portals and blogs. His music is a mosaic of many, often seemingly unmatched elements. Techno mixes with noise, classical and sacred music with cheap field recordings, simple melodies with pompous orchestral works. Everything creates an absurd, grotesque whole and in a strange, postmodern way it reflects a contemporary, postinternet world.
www.facebook.com/bartek.kujawski
8rolek.bandcamp.com
soundcloud.com/bartek-kujawski

11. RADIO NOISE DUO: Radio in the future
Radio in the future. The work is a continuation of the search for sound structures based mainly on radio noise. This time, some of the sources were sounds taken from the website www.websdr.org containing a collection of links to places with antennas and radio transmitters scattered around the world, combined with recordings of radio signals from analog radios.
RADIO NOISE DUO. Duet (Tomasz Misiak and Marcin Olejniczak) seeking inspiration in the element of electricity, radio noise and amplified objects of everyday use. Musicians used to be associated with such groups as ,,kalEka’’ (Misiak) and ,,Monopium’’ (Olejniczak), they also carried out solo projects. ,,Radio Noise Duo’’ is a branch of the ,,Radio Noise Orchestra’’ - an ongoing initiative aimed at valorising radio noise in various artistic activities. Recent projects were presented in: Gallery CKiS ,,Wieża Ciśnień’’ in Konin (,,Radio Noises – Lost&Found’’, 2017; ,,Pas transmisyjny’’, 2018 ), ,,Alterier’’ Gallery in Bełchatów (,,codaDADAnoc’’, 2017; ,,Kultura Poza Centrum’’, 2018), ,,Radiophrenia’’ (Glasgow, 2017), CSW ,,Łaźnia’’ in Gdańsk (,,In Progress’’, 2018), Ostrów Wielkopolski (,,Defibrylator 7’’, 2018), ,,Tak’’ Gallery in Poznań (,,Art Week’’, 2018), Kraków (,,Audio Art Festival’’, 2018, Toruń (XII Festiwal Performance ,,Koło Czasu/Ad Astra’’, 2018).
www.facebook.com/AntennaNonGrata/
antennanongrata.bandcamp.com
www.noiseradio.org

12. VOICES OF THE COSMOS: Radio Borealis
Radio Borealis. The recording contains radio sounds of Earth's magnetosphere (aurora borealis) and a signal generated from the hum of a drum machine. Both mono tracks were processed separately using elementary sound effects (filtration, reverberation, distortion), converted into stereo and arranged. The sound of the hum (drone) was processed using the electroacoustic effects: harmonization and manipulation of the sound wave over time.
VOICES OF THE COSMOS. Is a project created by two sound artists: Rafał Iwański (a musician known from such bands as ,,Hati’’ and ,,Kapital’’; performing solo as ,,X-NAVI:ET’’) and Wojciech Zięba (head of a music publishing house ,,Beast Of Prey’’; performing solo as ,,Electric Uranus’’) and Sebastian Soberski - an astronomer from the Astronomy Centre of the Nicolaus Copernicus University in Toruń and the manager of the Planetarium and Astronomical Observatory in Grudziądz. VOICES OF THE COSMOS uses the original extraterrestial signals and sounds (pulsars, magentospheres of planets, the Sun, the Northern Lights) captured with radio telescopes and other radio devices, archive recordings from space missions and signals from space. Instrumental tracks integrated into the rhythms and tones of the ,,the sounds of cosmos’’ are created with the electronic instruments, both digital and analogue, as well as various acoustic objects. It is a unique musical-scientific project in Poland, which uses the original outer space recordings. Discography: ,,Voices of the Cosmos’’ (2011, ,,Eter Records’’ / ,,Beast Of Prey’’, CD), ,,Voices of the Cosmos II’’ (2013, ,,Eter Records’’ / ,,Beast Of Prey’’, CD), ,,Voices of the Cosmos III’’ (2019, ,,Eter Records’’ / ,,Beast Of Prey’’, CD).
voicesofthecosmos.bandcamp.com
www.voicesofthecosmos.pl

Bandcamp Daily  your guide to the world of Bandcamp

Cannibal Corpse's George "Corpsegrinder" Fisher stops by for an interview